Tiger Stores have been supporting St Christopher’s since 2015. It started with a partnership near our main office in South West London and has grown to include a number of shops that are close to our services across the UK. 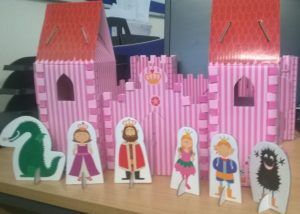 One particular donation has made a huge difference to a group of three siblings living with our foster carers in the West Midlands. The two sisters and one brother have experienced things that many of us could never imagine, but now they can live safely with their new family.

Katie is the middle child. She spends a lot of time thinking about her past experiences, which stops her from making friends and being happy in a group. She felt like she was to blame for what happened to her and that she isn’t worthy of nice things, when this is definitely not the case.

Katie joined PEAS, our Performing Expressive Arts Superstars drama group that runs every month for foster children. There is some learning involved in the activities but the main aim is to have fun.

In one session the children had to act like someone else. They all pretended to be different things, from Batman to a dancer, and looked at why you would want to be somebody else. They had to think about how that person would behave, interact with others and see the world.

Katie became a dancing princess. She loved dressing up and the freedom that being someone else gave her.

A few weeks later we received a box of donations from Tiger including a castle with a king, queen, prince and princess. Katie, her foster carers and her St Christopher’s social worker built and played with the castle as a group. She is always in charge of the stories that they play out together – sometimes they are happy and sometimes they are sad.

But this time the stories have an ending that Katie can control. The prince and princess are kept safe by the king and queen, who protect them from the dragon.

These items may have been a simple donation but for Katie they have been life-changing. Now she can show how she is feeling through play rather than through negative behaviour. With the love of her foster carers and support of St Christopher’s staff, she can come to terms with events from her past.

We are just giving away things that we don't use or can't sell anymore, but it is the amazing people at St Christopher's who turn our donations into things that can change lives.

Does your workplace want to support a charity? Choose St Christopher’s – your donations can make a genuine difference to the lives of children and young people.

Get your workplace involved

Charity news
Supporter cycles 500 miles for children and young people
Lockdown has presented a range of challenges for all of us, not least the difficulties ...
Read more
Charity news
Grant support helps young people’s education
The Winston Churchill Memorial Trust has awarded a grant to St Christopher’s to assist ...
Read more