A colleague from the Isle of Man’s Education team has designed a new sculpture to go on display in the renovated gardens around St German’s Cathedral on the island.

As well as working part-time as an Education Officer in our Education service, Angela Patchett is an artist specialising in sculptures and table top models. She had recently returned from living in New Zealand and was looking for a new creative project to get stuck into.

A grant was available from the Arts Council to fund a piece of public artwork for the island, so Angela decided to apply. They suggested speaking to the Dean of the St German’s, who was looking for artists to contribute to regenerating the area around the cathedral. Although it is the only one on the island, St German’s is very small compared to its contemporaries. It was not possible to extend the building so it was decided to create beautiful surrounding gardens instead.

They also wanted to use the regeneration project to commemorate the island’s history. During the Second World War, a Prisoners of War camp was set up on the island to house foreign nationals who were suspected of spying, or who were incarcerated simply for not being British. The camp was home to two famous faces – Archibald Knox, a well-known Manx designer in charge of censorship at the camp, and Joseph Pilates, a German prisoner who invented the fitness model named after him.

In light of the project’s aims, Angela was asked to produce something that expressed people’s power to overcome barriers to peace. Knox and Pilates became the inspiration for the sculpture as they showed how human endeavour and strength can overcome captivity to create beautiful art. 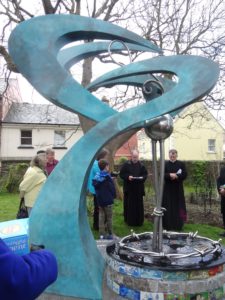 It took three years from design to installation to complete the sculpture. Once Angela had come up with the design the cathedral’s team needed to secure planning permission, taking into consideration things like bat migration patterns. Angela then had to locate mental fabricators who unpicked her design to recreate it in flat pieces that were scaled up to produce an exact replica.

The sculpture’s base is made of hand-painted bricks designed by prisoners and community groups on the island. Their designs are based on stories from countries that have experienced genocide, like Germany and China, and how the people rebuilt their communities using art.

Angela’s design was unveiled at a ceremony in mid-April as part of the revamp. This particular part of the outside space is surrounded by four other gardens named The Gardens of the Four Corners of the World.

She said: “It was a great privilege to contribute to the regeneration of the gardens and be part of the island’s creative industries and cultural heritage. I personally find the Knockaloe camp history very inspiring.

“I especially enjoyed working with the school children, the Isle of Man prisoners and the Cathedral community group to create the base tiles and brick features which celebrate the creative energy and community ethos flourishing there at Knockaloe despite the enforced captivity.”

Congratulations Angela on your impressive design and achievement! You can read the Isle of Man Today article covering the sculpture’s presentation here.

Staff stories
“My training course has benefited the whole team”
Michelle works in one of our 16+ semi-independent services in London. She has been studying for ...
Read more
Staff stories
Charity provides personal development opportunities for staff in all roles
The majority of St Christopher’s staff work directly with children and young people, who ...
Read more